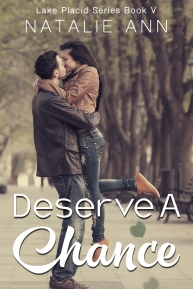 If you haven’t read the prologue yet, you can catch up here.

You can buy Deserve A Chance on Amazon.

“Hey, Mama. How are you feeling?” Amber asked her coworker Rene Buchanan when she walked into the office on Monday morning. “Did you miss me while I was gone last week?”

Rene smiled and pushed herself up from the chair. She wasn’t really that big at seven months’ pregnant, but big enough for her tiny frame to need help getting up. “Like Snow White misses a poison apple.”

Amber laughed. “I love this new you. You’re pretty funny,” she said, walking over and giving Rene a hug, then running her hand over the small watermelon protruding in front of her. “How’s Junior doing?”

“He’s doing good. Eating me out of house and home.”

“You mean you’re eating yourself out of house and home for him. Don’t be blaming the baby for the growth of your butt.”

“We’ve got all sorts of equipment here to get you right back in shape after Junior is done wrecking your body.”

Rene shook her head, then grinned. “You’re so cynical. Besides, it’s not all that bad. Ask Cole. He’d tell you he’d keep me pregnant nonstop if he had his way.”

“No, you aren’t,” Amber said, grinning. “You started it. So when’s the wedding?” Amber asked, glancing down at the large diamond on Rene’s finger. She wasn’t feeling any envy, not really.

“We don’t have a date yet. Cole wants to be married before the baby comes and I understand why, but I want to be able to dance and have fun at my wedding, not be wearing a mumu.”

“Then maybe you shouldn’t have gotten knocked up.”

“I know, I know,” Amber said. “Those super mutant powers of Cole’s. Bet those little buggers of his can swim through concrete. You better watch it, or before long there will be a little sister in the oven next.”

“Ah, but you plan on having more?” Amber asked.

Rene had been so shy when she moved here almost ten months ago. The last thing Rene thought would happen when she started her new job was to get engaged and be expecting a child in the first year. Was Amber jealous of Rene over it? Absolutely.

Amber had never understood how someone could find that connection with another person so quickly.

That is, until this last week when she met Zach Monroe.

She shook those thoughts from her brain. It was best to not let her mind go there right now or she might start crying again. She did what she had to do to protect herself and she wouldn’t second-guess that now. She didn’t need history to repeat itself.

“At some point. Right now, I just want to get through this pregnancy and settle into my new life.”

A few minutes later, her boss, Dr. Max Hamilton, walked into their office. “How was the convention? Are you ready to make me break out the checkbook?”

Max always said she could talk him into anything, and she could. She knew it and enjoyed the thrill of it. Besides, she made his practice a lot of money and was proud of her smooth-talking skills.

“I sure am. I’ll put all the brochures and paperwork together with my notes for you by the end of the week. You could have gone with me and then I would have had you under contract already.”

Max laughed at her. “Which is why I didn’t go with you. Besides, Quinn hasn’t felt well and I didn’t want to leave her alone with the kids for a week.”

“Is she okay?” Amber asked of Max’s wife of just eight months.

“Nothing that another month won’t fix,” he said, smiling brightly.

“Get out! Quinn is pregnant already!” Amber exclaimed, rushing over and hugging him.

“Yeah,” he said, returning her hug. “We told Nick and Mallory at dinner last night, and she’s telling her siblings today, so I wanted to let you guys know. Besides,” Max said, turning to Rene, “I figured you’d hear it from Mallory by the end of the day if I didn’t tell you now.”

Mallory was Rene’s sister-in-law and Quinn’s best friend. “What the heck is in the water here? That is three of you pregnant now. When is Mallory due again?”

“December eighteenth,” Rene said. “Just a month ahead of me. Congrats, Max.”

“Thanks,” he said. “Now let’s get some work done. Amber, you’re in with me. I’ll make sure I tell Dena and the rest of the staff when they come in so they aren’t hurt they didn’t hear it from the source. Rene, you’ve got the office rotation for now.”

Amber watched them both walk out of her office, then pulled her chair out and sat down.

Or at least that’s what she portrayed on the outside.

On the inside, right now, she was wondering what possessed her to sneak away Friday morning without saying goodbye to the one person she’d felt any type of connection with since she was in college.

The one person that might be able to help her move on.

“Are you okay, Amber?” Dena asked her.

It was the end of the day and Amber thought she’d done a good job acting like her normal self. She’d been laughing and picking on everyone all day long, just like she always did.

“I don’t know; it seems like your usual shine is dull. Just tired from the trip?”

She didn’t want to think about Vegas, because doing that would remind her of Zach. She wondered what he was doing right now. Was he thinking of her? Did he even miss her?

She’d never even gotten the name of the company he worked for. Just that he was there doing software demos on the other side of the building.

They met up each night for dinner and ended up back in his room. Every evening before it was time to meet him, she’d go back to her hotel around the corner, get a change of clothes for the next day, and then spend the night with him.

She’d never done that before. Gone to a convention and had a fling. And never before had she had a fling that lasted days.

That old saying of “what happens in Vegas, stays in Vegas” didn’t seem like it was going to work for her, though. Not when every time she closed her eyes she saw Zach’s light brown eyes glowing with passion as he looked at her. The bright smile of his and his frequent laughter. She’d never laughed as much as she had for those three days.

Nor could she remember the last time she was truly happy. The type of happy that made her cheeks hurt from smiling so much. Probably never if she thought hard enough.

“It was a long couple of days.”

Everyone still thought she was this party animal. Sure, she was when she was younger. A bit of a wild one, people would say in describing her. She was more so in college. Until that all changed one night when she woke up and realized she’d been doing everything wrong. That her life—her world—was never going to be the same again.

“Nothing more than the normal. Dinner and a few drinks, then off to bed.”

She wasn’t about to add she didn’t go to bed alone. Or even to her own bed.

“I do,” Amber said, smiling. “Wait until you see the stuff I tried last week.”

“That’s the spirit. Did you have anything done on you?”

“Of course. What’s the fun of going there if I didn’t get to try or use it?”

“Nothing looks different on your face, so it can’t be that.”

“Nope. This is for fat pretty much anywhere on the body but the face.” She slid her hands down her outer thighs, always loving her curves, even embracing them. “These babies are going to be slightly slimmer in a few days.”

“That’s what it boasts. Though I’m sure with just one treatment I won’t see much of a difference. It calls for a few. I’ll get all the information together and get it to Max this week. Just wait until you see what I end up talking him into.”

“Okay, now that is the Amber I haven’t seen today.”

She smiled at Dena, proud of herself for pulling it off.

Maybe in a few days she’d be back to normal. Unfortunately, she was afraid she was just fooling herself.