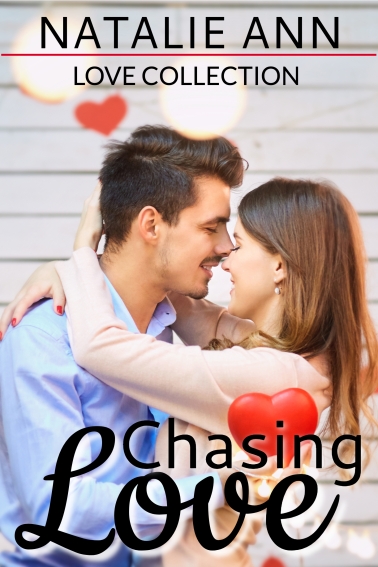 Time for a glimpse into Chasing Love.

Meena squinted her eyes at her older brother. She was bored and there was nothing to do. “Why can’t I play with you and Troy?”

“Because you’re ten and we’re fifteen and we don’t play anymore,” Brian said.

“Meena,” her mother said from the kitchen where she was baking cookies. The smell of ginger was awesome and she couldn’t wait to eat some, but she didn’t want to help make them. Baking wasn’t her thing. Neither was cooking or doing arts and crafts, coloring or playing with dolls. All the things her mother wanted her to do. “Leave your brother and Troy alone.”

“But I want to go outside with them,” she argued.

Her mother’s sigh could be heard loud and clear. “You can go outside but don’t go chasing them around. Let them be.”

Meena would take it as a win and rushed out the side door her brother and his best friend Troy just exited. Brian was lucky that his best friend lived in the same development as them, even if it was a few streets over. He was old enough to ride his bike around on his own with his friends, but she had to stay in the cul de sac where she could be seen.

When she was adventurous—which was often if her mother could be believed—she pushed her boundaries by going to the end of the street. Her mom could still see her if she craned her neck out the kitchen window more and that had been Meena’s answer.

Brian turned when Meena ran into the garage and got on her bike next to the older boys. “What are you doing out here, clown?”

“I’m not a clown,” Meena said, looking down at her rainbow tutu that she’d had on over neon green leggings. “You just wish you had my fashion sense.”

“She has you there,” Troy said to Brian. “I’d like to see you pull off that look.”

Meena giggled. If she was always chasing them around it was because she wanted to be by Troy and not Brian. Troy was always nice to her and made her giggle more than normal. He made all these funny feelings erupt in her belly a lot too.

“At least I can match my socks,” Brian said, laughing.

“The style is to make sure you wear the brightest, boldest colors and nothing matches?” Brian asked, smirking. “I’ll stay out of style if you don’t mind.”

Meena shrugged. She was used to the comments that she received. Not just from her brother or her parents—who were too dull and boring in her eyes. Her parents were probably closer to most grandparents’ age and they looked it. Except when her mother went to work at the hospital. She was thinking those ugly black scrubs would always be around for the nurses.

Her father still wore a suit and tie to work every day to the insurance firm he owned. A black or blue suit with a white shirt and a solid-color tie. Usually red or blue. Lame! She hadn’t once seen him wear one of the ties she’d picked out for him. Her father didn’t believe her when she said pink and purple stripes looked good on him.

“That’s because you boys are boring,” she said back. Both of them were just wearing athletic shorts and some T-shirt with a logo on it. Neither Brian nor Troy ever wanted to really stand out and she didn’t understand that. Standing out from the crowd was fun and exciting.

Troy laughed at her. “I like boring just fine, Meena. But you look cute dressed the way you are. Don’t let anyone tell you otherwise.”

Her smile lifted even more. Troy never picked on her. He never made fun of her. He said she looked cute. She wondered if he felt all those warm fuzzy bunnies hopping around in his belly like she did too.

“Thanks, Troy. You’re a lot nicer to me than my brother.”

“That’s because you’re not bugging him twenty-four seven like you do me.” But Brian brought his bike closer to her and tugged on her ponytail playfully. She wanted to be annoyed at him but found she couldn’t be. He’d never been really mean to her. He just wanted space that she didn’t feel like giving him.

“Can I go with you two, please?” she asked, trying one last time.

“No, Meena,” Brian said. “You’re too young and we’re going to hang out with our friends at the park.”

“Maybe another time,” Troy said, and the two of them started to pedal away.

“Why would you say that to her?” she heard her brother say to Troy. “Don’t encourage her to hang around us even more.”

“She’s just a kid looking for attention,” Troy said. “She only wants a friend to play with.”

Meena narrowed her eyes at the boy’s retreating back, then whispered to herself, “A friend, Troy? I don’t think so.” She giggled to herself. “You’re going to be my husband someday.”