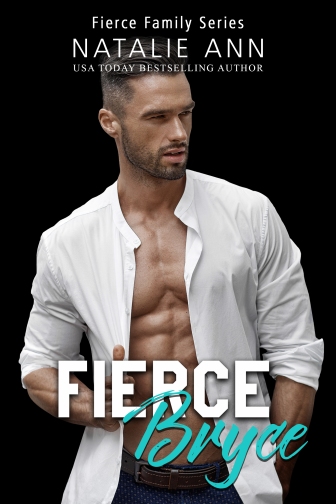 “Hey there.” Bryce Fierce turned his head when he felt a finger trail down his arm. Not just a finger, but a fingernail, sharp and teasing. No pain, but with enough force for him to know who it belonged to. Then again, the scent of her minty gum mixed in with whatever fruity body spray she’d spritzed on let him know too.

“I was wondering,” she said, leaning into him. She had the lean perfected. She had everything perfected to get the attention she wanted. “If you were going to be working on your lab later tonight?”

“I planned on it after dinner.”

She snapped her gum and giggled, her blonde hair floating around her shoulders. “I could work on it with you? Professor Lang said that I’d have a better understanding of the class if I did my labs with classmates.”

She’d never have an understanding of it, in his opinion. “And you want to do it with me over your friends?” he asked.

Her friends that she walked around campus with, her posse. Always laughing, flirting, bouncing around with her arm on one guy or another. He wasn’t sure if she dated anyone, or at least exclusively, but she was sure seen with enough guys.

“My friends aren’t working on it tonight,” she said, her long nails playing a tap on his bicep now.

He might be a nerd in some people’s eyes, but he was still a Fierce and looked like one. Tall, dark, and built. If he had his face in books more than women or sports, that was his prerogative, but his looks still had women coming on to him, saving him from ever having to make the first move.

He liked it that way too.

“I’ll be around working on it if you find your way into the lab, but I’m not waiting for you,” he said. She frowned and he didn’t care. He wasn’t stupid; he wasn’t going to be used.

“What time are you going to start?” she asked, pushing her bottom lip out. “I’m meeting friends for dinner at six.”

“I’ll be in the lab around six thirty,” he said, adding another thirty minutes to when he’d planned to show up. No reason to be a complete jerk.

“I’ll see you then,” she said, turning, her hair hitting his neck as she strutted back over to her little crew at the other end of the room.

“What was that?” his buddy Kyle asked him, coming over to whisper. “Marcella was totally into you.”

Bryce snorted. “She’s into someone doing her work for her.”

“And?” Kyle asked. “Who cares if you get to spend some time with her.”

Kyle wouldn’t understand. He was smart like Bryce, but he looked like the brain that he was. He’d never dated and was just dying to get his first girlfriend. Maybe if he’d focus on girls that he had more in common with instead of those that wanted to use him, he’d find some success.

Bryce had been there and done that. He’d dated in high school. He’d dated in college. But school always came first and he was sick of girls that only wanted to spend time with him so he’d help them out. Especially if they were dishonest about it.

“I don’t need to waste my time with her when I’ve got work to do. She’s going to come over and ask me a million questions or just copy what I’m doing anyway.” He wasn’t an idiot. He’d been around the block enough. This was an old hat to him.

“Yeah, but everyone knows she puts out when she gets help. Like a payment of sorts.”

Bryce stared at Kyle to see if he was joking, which of course he wasn’t because everyone knew the games Marcella played. “I don’t need that kind of payment.”

“Says no guy ever,” Kyle said, his eyes drifting over to Marcella and her friends. Bryce looked across the room to see Marcella wave at him. He didn’t wave back, but he did nod his head. “Dude, guys like us need chicks like that to bump us up.”

“This guy doesn’t,” Bryce said. “I think more of myself than that.”

He walked away from Kyle and took a seat before class started, knowing Marcella and her friends were talking about him and giggling.

He wasn’t going to be used by anyone. If some woman didn’t want him for who he was, then he had no time for her. No energy. And no desire.