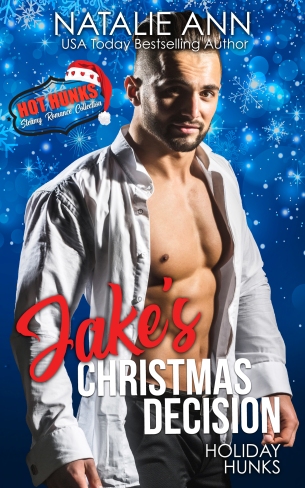 Seven Hot Hunks to warm our hearts at the holiday!

Army Helicopter Pilot Jake Baxter has flown his last mission. After an unsuccessful attempt to rescue his best friend from captivity, he finished up his final tour and left for good. Haunted by his failings, he heads home for the holidays in an attempt to start his life over.

Ambition has always been Rachel Chapman’s middle name. She’s out to prove to everyone she has what it takes through hard work and determination, not her family’s name, money, or her good looks. So she’s given up on finding love until someone is willing to accept her as an equal. That is until Jake enters her life and she realizes that being an equal may not be what she always thought.

Seven USA Today bestselling and award winning authors come together to give you Holiday Hunks, the next in the Hot Hunks Steamy Romance Collection

A helicopter pilot with a decision to make, a cowboy working on his best roundup yet, a dancer faced with a dilemma, a hockey player’s surprise, a roping rodeo star’s ultimatum, a fireman’s miracle, and a billionaire’s wish. What do these seven hunks all have in common? They are spending the holidays with family and friends where each and every one has a life-changing event. Read along and watch these seven hotties meet their match, fall in love, and have a very Merry Christmas!

Check out the other Holiday Hunk stories

Have you read the first Hot Hunks Steamy Romance Collection, After Hurricane Nina?