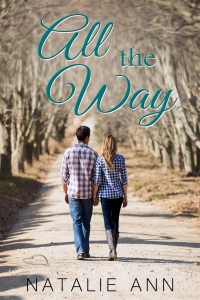 As a child working alongside her father’s knee, Brynn Palmer had dreams of overseeing her own construction site. Being a woman in a man’s world didn’t bother her. She had it covered and was making it work. Until she realized it really wasn’t working at all. Then one night all her dreams came crashing around her.

Alec Harper took one look at Brynn Palmer and knew she was the one for Harper Construction, and the one for him. For years he had watched all his siblings and friends tumble like dominoes into love. All the while he sat back waiting and wondering when his turn would come.

But now that he found her, could he convince her to roll the dice and give him a chance?

2 thoughts on “All The Way”