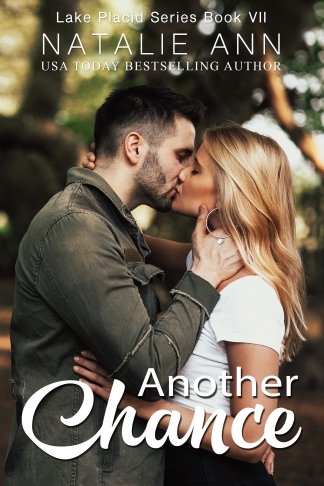 The last teaser of Another Chance!! Catch up on the Prologue and Chapter One.

Dena looked to see Amber standing next to her. Everyone had left but the two of them. They were just waiting for Amber’s husband, Zach, to pick them up and bring them home. Since Celeste hadn’t been drinking she dropped the rest of the girls off.

“How did you guess?” Dena asked, looking around the pub. He was gone now, but she hadn’t seen him leave. Once she’d walked back to her table, she angled her chair so that she didn’t have a view of the bar or the door. No reason to give into temptation.

“I saw you freeze when he walked in the door. I put the two together. At first I didn’t recognize him. Remember, you guys were a few years behind me in school.”

“Yeah,” Dena said softly. She really didn’t want to talk about this, but knew Amber wouldn’t let it drop. She never did.

“I hate to say this, and please don’t think I’m not on your side because you know I am. But damn, he has only gotten better with age.”

“I noticed,” she said dryly. Not that she wanted to, but it was hard to avoid it.

He was still just brushing six foot. Dark hair that was lush and wavy. Big brown eyes that she’d always lost herself in. He’d always taken such care with his appearance, but for some reason he looked a little off tonight. He was gorgeous as ever, his full lips so soft and kissable—she hated that those thoughts popped into her head—but he looked thinner than she’d seen before. His sharp cheekbones were more pronounced and his eyes looked tired, even troubled.

She hadn’t seen him personally since he walked out on her that night before they both left for college, but like the idiot she was, she’d never been able to put him far from her mind.

Social media posts drew her in like a bee to a flower. She didn’t follow him, but others she followed did and it was hard to avoid things about him all the time.

He was some big time lawyer in Manhattan like he always wanted to be at his stepbrother’s father’s firm. She was guessing he’d made it to the partner status he was striving for too, but wasn’t positive. It had always hurt too much looking into him more than necessary. Like holding onto the old dream knowing the outcome still broke her heart.

In the past two years if she saw anything regarding him, she clicked away. It was just too heart wrenching to keep stalking information on him. Between that and running into his mother and stepfather from time to time, she couldn’t seem to move past the shattered remains of her emotions and anger that had built up so high.

“Why was he limping?” Amber asked.

“What?” she said, turning to look at Amber now. She’d been looking off into the distance hoping Amber would change the subject.

“You didn’t notice he was limping?”

“No. I was opening the bathroom door and ran into him, but then I walked away. I didn’t see him leave nor did I watch him walk once he entered the front door.” Why hadn’t she’d paid attention to something like that?

“You had words with him when you went to the bathroom and are just telling me now?” Amber said, holding her by the shoulders. “No wonder you came back shaken. What did the prick have to say?”

Amber had always been blunt and to the point, but supportive as ever. “Not much,” she said. It was only a few words and Dena was positive Matt would be gone from Lake Placid within days. No use hashing it all out, even in her head.

But by the time Zach dropped her off at her apartment, the tears she’d been battling just let loose. Of all the freaking nights for Matt to make an appearance in her life—her thirtieth birthday with her closest friends.

She was supposed to be celebrating and having a great time. Not thinking about the past that blew up in her face like dynamite to an old abandoned warehouse.

Not wondering why she was never enough for him to come back to. Or for him to even stay. Not to even talk to her about it.

If given the chance, maybe she would have moved, but he never gave it to her.

They were both young and they had their whole lives ahead of them. He couldn’t expect her to make a permanent decision at such a time. It had been hard enough just going a few hours away from her father, but promising she’d leave forever? Please…she was only eighteen!

Once she was ready for bed, she shut the light off and climbed in, knuckled a few stray tears away and told herself that she was ready to move on with her life.

All those years ago she’d promised she’d never give him another chance—not like he was asking—but it was time to commit to that promise.

It was time to push Matt Winters from her mind once and for all.

Matt had been back to town for about a week now. He knew at some point he’d seek Dena out; he just didn’t know when or how and hated that it happened the way it had.

That he wasn’t prepared, when he prided himself on always being prepared for everything in life.

He was as good as he was at his job because he planned it all out. Even his life… “Take no chances” had been his motto.

Randall was years older than him and already practicing at that point. Whenever Matt had gone back to visit his father and stepmother, Randall would stop over to see him and take him under his wing. Tell him all about the wonderful and exciting life he had and how it could all be Matt’s one day too. An impressionable teen at that point, he was looking for anyone that would show some interest in him.

What he’d seen in Randall was someone that he could look up to. Someone that had it all together and was going to be successful. Everything Matt had wanted himself.

Sure, his father was smart and successful, but he was an engineer. Nothing exciting in that that Matt had ever seen. But moving to Lake Placid with his mother and stepfather had been the worst thing for a kid to have happen his freshman year in high school.

To go from being a short train ride to one of the most exciting cities in the US to some backwoods mountain where all you could do was ski or play ice hockey in the winter. The summer you could swim in the lake, but other than that, there wasn’t much for Matt to do. Not like he was used to. He’d never been an active outdoorsman and that was what Lake Placid catered to.

But he’d met Dena Hall and everything about Lake Placid didn’t seem so bad.

In the back of his mind he knew he was leaving the first chance he got and he’d told her so. Multiple times. She just never seemed to want to believe him. Or even listen to him when he’d come back from visits with his father and tell her about all the great things he’d done and how fun it’d be to live there.

Yet she still seemed so shocked when he told her the night before he left for good.

He wanted her to go with him. He all but begged her, but she’d always said, “I won’t leave my father. He’s already had one woman leave him, I won’t be the second. We’re all that the other has right now.”

She said it wasn’t the same and it hurt. Hurt more than when he found he’d be moving here to begin with. It seemed no one really wanted him the way he needed. No one put him first, except Randall taking him under his wing.

So he wanted her to hurt just as much and broke it off sharp and swift. He’d told himself it was better that way. That there would be no confusion or misunderstanding.

She’d know he wasn’t coming back and that she was the one who’d made that choice by not even giving him a chance, but telling him multiple times she’d never leave Lake Placid.

Well, she was right since she was still here. So then why was he wrong? Why did he come back?

Simple. He’d stared death in the eyes. He woke up in that hospital and knew that by his own stubbornness he’d thrown away what was the best thing in his life.

He’d never been able to find it again and was determined to win her back.

So he was here in this town he hated so much, but looking at it through the eyes of an adult and seeing it wasn’t so bad after all.

That everything he wanted in the big city didn’t happen the way he’d planned on it. That people made him promises they didn’t keep and used him for their own personal gain.

The question was, could he get Dena to break the promise she’d made to him years ago? Because he was determined that she’d take him back.